On Friday, I joined up with a group of other VHTRC members to run the 10th annual Vicki's Death March, a scenic run through some of the best trails in Shenandoah National Park.

My thermometer read 20 degrees at the start, so there wasn't much lollygagging.  Quatro Hubbard offered a few comments and made sure everyone had turn sheets, and then we were off.  The group quickly broke into smaller groups according to ability and desire. 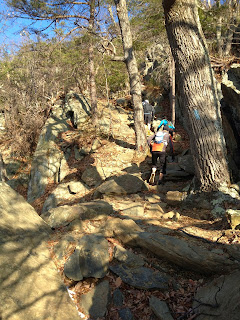 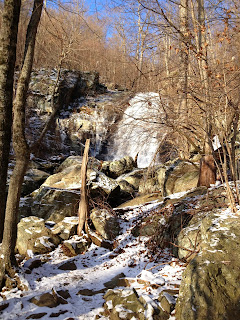 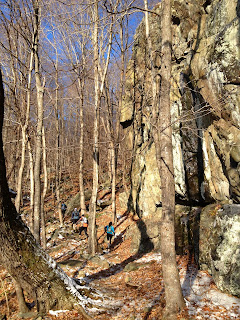 After a long push up White Oak Canyon with its spectacular waterfalls, my group found itself pondering whether conditions would allow us to keep going up to Hawksbill Peak, the highest point in the Shenandoahs, or jump on the Appalachian Trail and cut things short.  We saw more footprints going up than coming down, and decided to give it a go.  I'm glad we did. 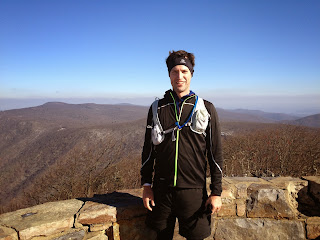 While the running should have been mostly downhill from there, we were also a section that got very little sun, and the ice made the footing treacherous.  Happily, I only slipped and fell once.  On some of the steeper downhill slopes, my hip was giving me trouble, a holdover injury from the Stone Mill 50 two weeks before. 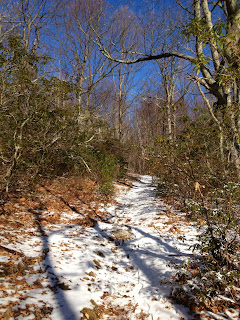 At about mile 13 I left my group go on ahead while I stopped to take a few pictures.  Despite my best efforts, I never caught them again.   Without their guidance, I found myself frequently referring to the turnsheet, determined to cover the entire course. 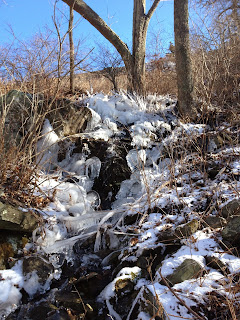 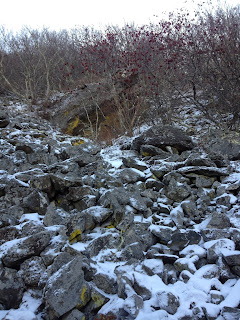 When I got back to the car, I discovered that my group had stopped in at Skyland Resort (mile 15.6) for pie and coffee, and then taken a shortcut back.  Indeed, many of the more experienced runners took advantage of the day to run longer or shorter routes, according to their own pleasure.  In fact,  as I discovered while looking at my GPS track later, I managed to put a couple of extra miles on, most of it around the Stony Man cliffs and again while looking for an unmarked path to the Corbin cutoff. 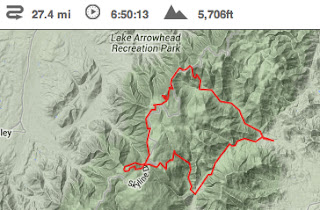 All in all a fantastic day.  Thanks to Quatro and the other VHTRC members who organize this outstanding run.