Shots from the Burlington Marathon

I'll have more on my experience in the Burlington Marathon when I have the time to record my thoughts. Until then, check out this video produced by the Burlington Free Press of the scene on the ground. Keep your eyes peeled around the 30 second mark for a cameo of one of your very own Reading, Running and Red Sox bloggers (hint: look for the bright orange shirt)!
Posted by gibsonmeigs at 10:05 AM No comments:

Before the Burlington Marathon

Posted by gibsonmeigs at 7:17 PM No comments:

It looks like this is shaping up to be the summer of the long distance running book.

Coming on June 5 is Scott Jurek's Eat and Run.  Those who have read Born to Run (and these days, who hasn't?) will already be familiar with Jurek, who McDougall described as "the top ultrarunner in the country, maybe in the world, arguably of all time."  Whether you agree with that statement or not, his record is undeniable: he won the Western States 100-miler seven years in a row, not to mention two victories at Death Valley's 135-mile, 130 degree Badwater Ultra and numerous victories at other major races.  In 2010, he set a new U.S. record in the 24-hour run, covering 165.7 miles in that period.

And all this on a vegan diet.  ("Remember," Jurek said in an article in the New York Times a few years back, "almost every long-distance runner turns into a vegan while they’re racing, anyway — you can’t digest fat or protein very well.") 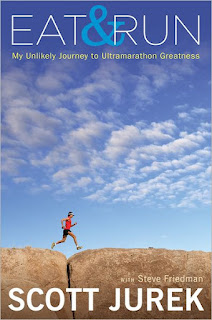 Jurek is an amazing ambassador for the sport, and this promises to be a fascinating book, full of stories, science and practical advice.

With the Burlington Marathon four days away, it's time to completely rest the muscles and think about carbo loading! From what i've read, you should carbo-load three days before the race, but do so that you're not adding additional carbs on top of your regular diet but substitute some of your regular food with foods that are high in carbs. With this in mind, here's what I have planned out for my menu for the next three days:


What do you think? How do you carbo load before a long race?
Posted by gibsonmeigs at 8:56 AM No comments:

In general, I don't read books about running.  I enjoy running -- but there are too many other interesting things to read about in my not-so-abundant free time.

Nevertheless, I am thinking of picking up 14 Minutes, the newly released memoir by Alberto Salazar.  Salazar won several marathons and set numerous records in his early 20's, but perhaps is most famous for his epic "Duel in the Sun" against Dick Beardsley in the 1982 Boston Marathon, a race he won by a mere two seconds.


Having drunken almost no water along the way, Salazar's weight went from 140 pounds to130 pounds.  He would recover, but he would never run so fast again.   As his body began to decline, Salazar began to train harder and harder, running sometimes close to 200 miles per week. 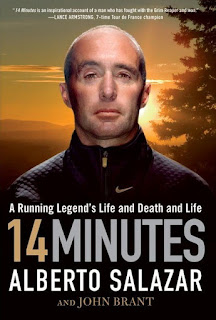 Salazar, himself the son of a Cuban revolutionary, would eventually wander the world, seeking solace in Yugoslavia and South America. Finally, having retired from professional running, he returned to the States, where he took employment with Nike.  Today, as a running coach, Salazar is obsessed with running form.  Check out this detailed and fascinating New Yorker article about his work with Dathan Ritzenhein.

It's a fascinating life story, and so far, and the few reviews that have come in so far have been excellent.  The Wall Street Journal calls it "meditative and affecting, an engaging account of a true champion's rise, near-demise and arrival at peace."

Can anyone comment who has read it already?
Posted by Joel at 10:39 AM No comments: 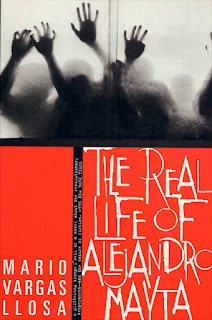 The narrator of The Real Life of Alejandro Mayta is a famous author, largely indistinguishable Mario Vargas Llosa himself.  His project is to write a fictional portrait of a Trotskyist intellectual who tried to lead a 1950s uprising in the Andes mountains.  But to do so, he first needs to understand the truth of that intellectual's life.  And so he sets about to interview the family, friends, and co-revolutionaries of Alejandro Mayta, each of whom shares contradictory stories.   As he listens to each account, the narrator shapes his project in his head, forcing readers to move up and down through multiple levels of narrative.

If this sounds like a Nabokovian conceit, it is, but it is also a political commentary, an adventure story, and generally a damn good read. (What it is not: "magical realism").  I'd not paid too much attention to Vargas Llosa before he won the Nobel Prize in 2010, but I am looking forward to becoming more familiar with his work.
Posted by Joel at 3:20 PM No comments:

There are some neat technological perks for participants in the Burlington City Marathon:


While i'm not going to tweet or FB my stats, I like the use of technology to give observers just-in-time information. For instance, I'll be able to have my tracking information sent to my family so they'll know more about when to expect me at the spots on the course where they'll be watching. Fun!
Posted by gibsonmeigs at 10:21 AM No comments:

less than two weeks remain before the race.  i've put in over 700 miles so far this year preparing for one single run, a fact which i'm finding a bit hard to get my mind around right now.  it's pretty clear that the journey is much more than a means to the end, as as todd pointed out, and i'm not terribly interested in stating my goals for the race, but i will say that i'm very happy with how training has gone.

i had some very memorable runs, most of them along the ever-beautiful charles river, 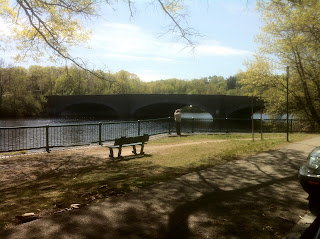 some of them with my co-bloggers todd and joel, a few really nice trail runs and a few really awful slogs as well.  through all of it, i can say i've never enjoyed running more than i do now.

i'm really looking forward to toeing the line in a couple of weeks, of spending a few hours running and then spending an evening with my close friends and family celebrating.

i don't expect the next two weeks to be easy; my mind and body aren't wired correctly for tapering.  i hope my legs will thank me on race day!

Will Middlebrooks has been lighting it up in his MLB debut with the Red Sox. For perspective, note that he's had at least one extra-base hit in each of his first five major league games (two singles, four doubles, and three home runs) - and that's with just the one at-bat last night!.

Many fans are understandably smitten, and want the Sox to trade Yook and had 3B to Middlebrooks. I sympathize with this view: Youkilis has looked old and slow this year, and I fear that his body will no longer enable him to play at the elite level that we're used to seeing him play. But it remains to be seen if Middlebrooks can keep up this torrid pace. Remember last year when Reddick was smashing the cover off of the ball and how quickly he cooled off? Even if Middlebrooks doesn't stop hitting, it's too soon to give up on Youkilis. After all, at his best, Youkilis is an excellent batter with fantastic plate discipline. Here's hoping that the  "walking program" that he's started will get him back to normal!

Seriously, though - the Sox have a dilemma: how to keep Middlebrooks bat in the lineup? Some are suggesting that Middlebrooks play in the outfield, but as Peter Abraham writes: "Middlebrooks was a third baseman in high school and has played only third base professionally. Could he play the outfield? ... Generally speaking, Valentine said third baseman do not make good corner outfielders." So that's probably not a good idea. Youkilis himself certainly did not look good when the Sox tried him in left.


Here's what I would do with Youkilis: Can the Red Sox convince him to be their Michael Young? He could play some third, first, left field and DH. Maybe even some second base. With his bad back, I don't know if this is feasible, but it would be the best use of the talent.

The question mark is his durability, but in a perfect world, this makes the most sense. Keep Middlebrooks excellent bat in the lineup on a daily basis (at least while he's hot), and have Youkilis as your utility guy, resting him and his bad back when you don't need him. The bonus with this plan: we'd be saved from watching the horrorshow that is Nick Punto at the plate.

What do you think?

Posted by gibsonmeigs at 8:39 AM 2 comments:

Active.com runs down it's top six post-run beers. The list:

I've only had the Victory Lager, and while it would be good post-race, immediately after a race I crave a lighter beer. I imagine a good ol' Magic Hat #9 or Long Trail Blackberry Wheat would taste pretty good after ripping up a course on a hot day. I'm hoping that I can find myself a Switchback after the Burlington Marathon.

What's your favorite beer after a good run?

Posted by gibsonmeigs at 2:25 PM 2 comments: